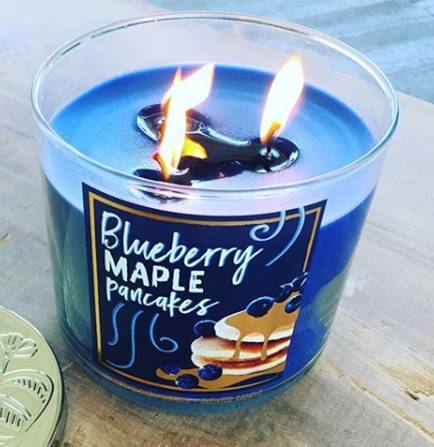 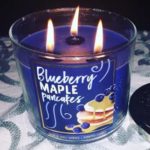 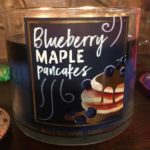 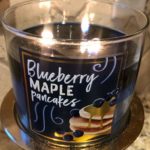 Did you know that January 28th is National Blueberry Pancakes day.

Bath & Body works decided to celebrate this.”holiday” in the summer as they introduced the Blueberry Maple Pancakes candle in July of 2018 as part of their fall collection.  I love maple pancake scents, so I was excited to try this candle.

Cold Sniff: On cold, I picked up a heavy blueberry note.  I was expecting a sweet, candy blueberry scent, but it was more like smelling a bag of frozen blueberries.  The blueberry note wasn’t overly sweet, but wasn’t tart either.  The maple notes were pretty faint and the pancake/bakery note was almost non-existent.  Not a bad scent on cold, but not what I was expecting.

Lit Scent: Once lit, the blueberry notes I picked up on cold came through nicely.  I give Bath & Body Works credit for producing a nice blueberry note in this candle.  The maple note was stronger once the candle got going.  The maple reminded me a bit of one of those mcgriddle breakfast sandwiches you get from McDonalds.  It was a toned down maple scent which did blend nicely with the blueberry I was getting.  One disappointment with this candle was the lack of the pancake note.  I don’t know if it was drowned out by the blueberry & maple, but the pancake/bakery part of the candle just wasn’t there for me.

Scent Throw & Strength: The throw from this candle was pretty good, probably a 8.5 out of 10.  The scent really traveled throughout the house. The scent strength was decent, maybe a 6 or 7 out of 10.  It’s not one of those candles that is overpowering, but you will be able to detect it a good 20 feet or so from where the candle is located.

Final Thoughts: I have mixed feeling about this candle.  I don’t think the name is 100% accurate.  For me, its frozen blueberries & a mcgriddle sandwich.  Its not a bad scent, just not what I had envisioned.  But its already a hit on social media and no doubt plenty of people are going to like this candle.

YouTube user Bren posted a positive review on the Bath & Body Works Blueberry Maple Pancakes candle. The reviewer liked the blueberry note and said there was just enough of the maple for her liking.  She described the scent of this candle as blueberry pie filling mixed with maple syrup.  In terms of scent throw/strength, Bren rated both at an 8 out of 10.

Popular candle reviewer Hearth & Soul also posted a review of the Blueberry Maple Syrup candle. The reviewer like the scent, rating the fragrance appeal as a 7 out of 10.  He described the scent as an authentic blueberry mixed with undertones of cinnamon, brown sugar & nutmeg.  He rated the scent throw as a 7 out of 10. The reviewer ended the video saying he didn’t hate the candle but wasn’t in a hurry to buy it again.

Tinadivalicious posted a positive video review for the Blueberry Maple Pancake candle. The reviewer described the scent as a nice balance of blueberry & maple notes.  In terms of scent throw, the reviewer gave it a 6 out of 10.  He said it wasn’t as strong as you’d expect, but that wasn’t a bad thing.  The reviewer ended the video by saying he would repurchase this candle. 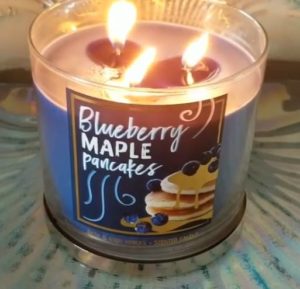 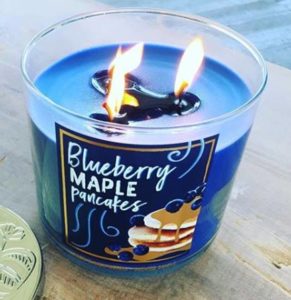