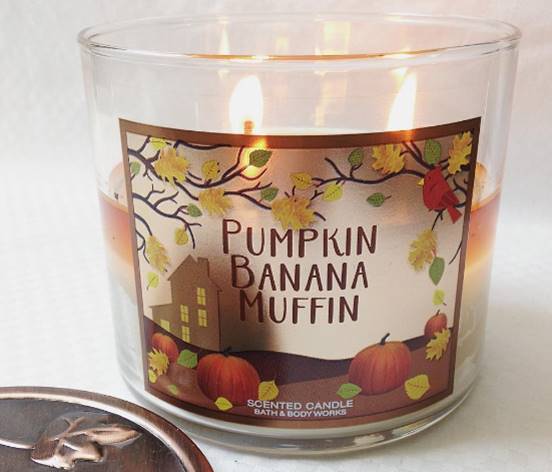 The Pumpkin Banana Muffin Candle can be purchased at Amazon.com 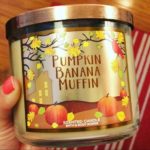 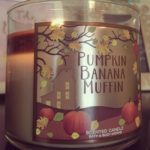 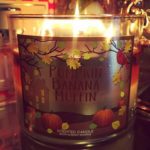 Our Review of the Pumpkin Banana Muffin Candle

Cold sniff:  definitely smell banana and sugar. Almost smells like a vanilla note. There’s a really faint scent of cinnamon. Having trouble detecting the walnut or pumpkin. The banana is nice, not overpowering or sticky-sweet. Smells natural, not like fake banana.

Lit: it’s only been lit for five minutes and we can already smell it. It’s very nice – true to the cold sniff with a little more of a caramel-y note. After an hour or so it has filled up the main level of the house. It’s a sweet, noticeable but not overwhelming scent. It’s not a classic fall scent, so it won’t create sudden urges to jump in a big pile of leaves or anything, but it’s a nice change.

YouTube user Bren posted a review of the Pumpkin Banana Muffin Candle.  The reviewer said that she got all the scent notes minus the pumpkin and compared it to the Banana Nutmeg Bread Pudding from 2014. She said on cold sniff that the banana came through more like a candy, but when lit, the banana smelled more authentic. In terms of scent throw, she rated this candle a “6” out of ten, calling it better than average. She mentioned that she “liked it, but did not love it”.

YouTube user Hearth & Soul posted a review of the 3-Wick Pumpkin Banana Muffin Candle. The reviewer said it was very similar to the Banana Nutmeg Bread Pudding candle and there was no pumpkin note. He rated the performance of the candle a “10” and gave the fragrance appeal & the scent throw both a “7” out of ten. The reviewer ended the video saying it was “not bad” and “you could do worse”.

YouTube user tinadivalicious posted a review of the Pumpkin Banana Muffin Candle. Like all other video reviews, the reviewer said this was the Banana Nutmeg Bread Pudding candle and if you liked that candle, you would enjoy this one. He called it a “banana pudding” scent, almost like a banana candy note. He also mentioned the candle had a vague bakery scent. He did go on to say he “loved the scent”. In terms of scent throw, the reviewer called it a “medium to medium-light” and rated it a “4”.  He ended the video saying he loved the scent but wished it was stronger.

“Pumpkin Banana Muffin is my new favorite. I haven’t seen this before, and I’m very excited it exists. I’m obsessed with banana flavored anything, so obviously a candle that smells like banana is a dream come true. This smells like caramelized bananas with a subtle walnut scent. It’s not too overpowering, which I like, but it still makes your house smell like a bakery.” – addictedtolovely.com 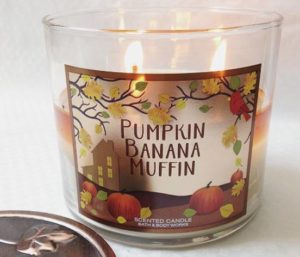