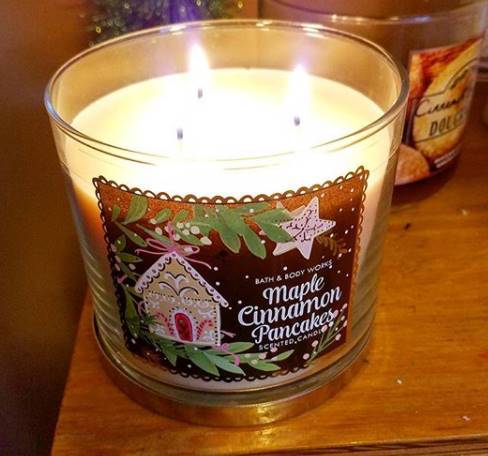 You Can Purchase the Bath and Body Works Maple Cinnamon Pancakes 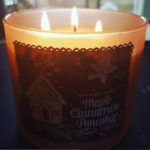 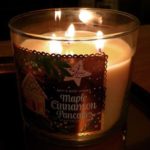 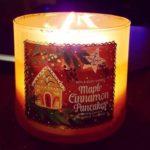 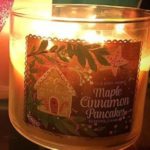 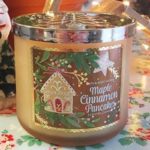 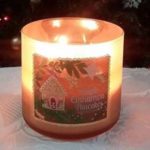 Our Review of the Maple Cinnamon Pancakes Candle

Cold sniff:  Very sweet & buttery scent on cold, similar to a rich caramel.  Didn’t get to much of a bakery scent and only a slight hint of cinnamon (or an unknown spice note).   I was expecting something like Pumpkin Pecan Waffles, but this wasn’t even close to that scent.

Lit Scent: Once lit, the candle got even sweeter. Its a rich, sweet caramel scent.  The cinnamon I thought I smelled on cold was nowhere to be found once lit.  I don’t mind sweet candles, so this wasn’t a problem for me.    However, when I buy a candle called Maple Cinnamon Pancakes, I’m not expecting a Caramel candle.

Scent Throw & Strength: Both the scent throw & strength was a 7-8 out of 10.  The throw was good, filling our large family room and traveling to the kitchen and hallway.  This was a strong candle at time, but it diminished a bit toward the end.

Final Thoughts: The scent is decent, very creamy & very sweet.  The performance of the candle was good. However, this candle was grossly mislabeled as I didn’t pick up anything that resembled a Maple Cinnamon Pancake.

YouTube user 2GayDads posted a mixed review of the Bath & Body Works Maple Cinnamon Pancakes Candle.  The reviewer said the scent was “just ok”, describing the fragrance as a “very sweet” mix of caramel & maple. He compared it to the Bath & Body Works Pumpkin Caramel Latte candle release last year. In terms of scent strength & scent throw, the reviewer said it was a “7-8” out of 10. He ended the video saying that he didn’t love the candle, but didn’t hate it either.

Popular YouTube candle reviewer Bren posted a negative review of the Maple Cinnamon Pancakes candle.  The reviewer described the scent as a very sweet, caramel fragrance.  She stated that the candle was almost sickeningly sweet.  The reviewer also said the scent was very strong and was giving her a headache.  She ended the video saying she would not be repurchasing this scent.

YouTube candle reviewer Hearth & Soul posted a negative review of the Bath & Body Works Maple Cinnamon Pancakes candle. The reviewer began the video saying he hated the candle, due to the mislabeling of this product.  He did not get any bakery or cinnamon notes for this candle, just a sweet, caramel fragrance.  The reviewer rated the scent throw an 7-8 out of 10.  He ended the video saying he did not recommend this candle. 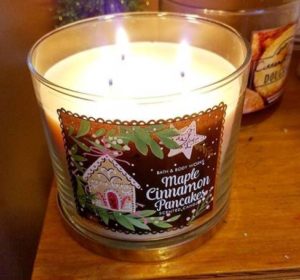 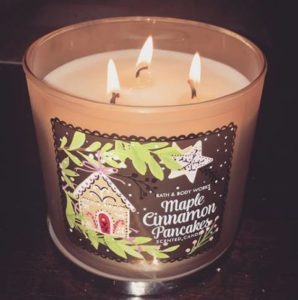