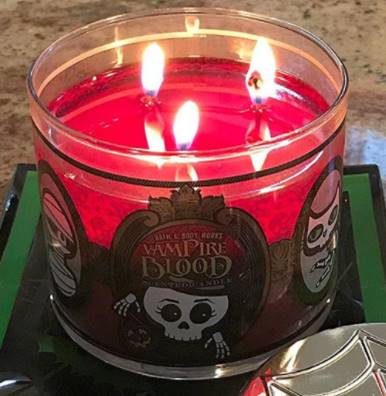 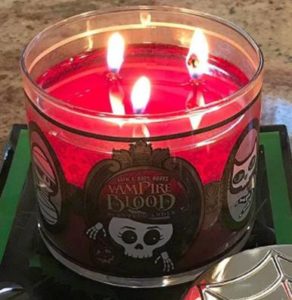 Bath & Body Works will have a few spooky selections in their stores & online.  Their Vampire Blood candle, with notes of Jasmine, Strawberry & Plum is always a favorite around this time of year.  Their “Happy Halloween” candle, which is a repackage of their Sweet Cinnamon Pumpkin scent.  Both candle retail for $26.50 for their large 3-wick jars.

Likewise, Yankee Candles will also have an assortment of Halloween goodies in their stores. Their Sweet Seduction candle, a repackage of their Candy Corn scent, will sure to be a favorite.  This candle does a good job of capturing a true-to-life candy corn scent, with an added vanilla cream note to balance out the sweetness.  Their other featured Halloween candle is Haunted Hallow, which will combine pine/woodsy notes with cinnamon & bergamot. 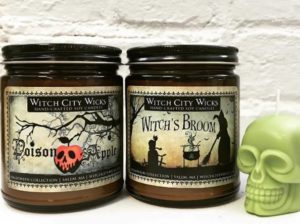 Salem, Massachusetts based Witch City Wicks is scaring up some interesting candles for the Halloween season.  The company produces 6 different Halloween fragrances including Pumpkinhead (Notes of Pumpkin *Cinnamon), Poison Apple (Notes of Apple, Cinnamon & Nutmeg), & All Hallow’s Eve (Notes of Apple, Patchouli & Clove).  Their candles come in three sizes, with prices ranging from $6.25 for their 2oz travel tin, to $18 for their 9oz jar candle. All the candles can be purchased from the Witch City Wicks website.

If you’re looking to add some flair this Halloween season, you may want to purchase a bleeding skull candle from Amzon seller Wicked Wicks.  This Bleeding Skull Candle

is shaped like a skull, but is filled with red wax on the inside, thus creating a “bleeding” effect once lit. The candle retails for $11 on Amazon and also comes in a glow in the dark version. 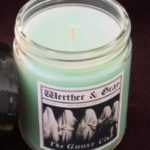 Delaware based Werther & Gray specializes in gothic themed candles that they sell year round. Their “dark series” has candle scents such as “Mummy’s Curse” with notes of cotton & incense, “The Ghost Club” with notes of Sandalwood & ether, and the blood red colored “Reign of Terror” which is a cake scented candle. In all, the company has 27 different scents to chose from, with a retail price of $19 for an 8oz jar. 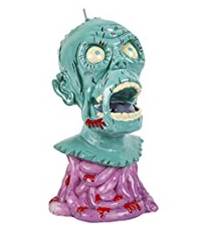 If you’re looking for an unscented novelty candle to burn for the Halloween season, head over to Amazon for this unique candle creation.  Amazon Store “After Midnite” has a melting Zombie candle which retails for $12.99.  This candle is 6″ tall and resembles a Zombie head with a base of guts.