The Cinnamon Stick candle can be purchased on the Yankee Candle Website at the following link. 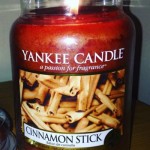 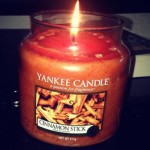 What Others are Saying about the Yankee Cinnamon Stick Candle

YouTube user Hearth and Soul posted a video review for the 22oz single wick Yankee  Cinnamon Stick Candle. The review described the scent as 85-90% cinnamon and the rest clove. He enjoyed the real cinnamon scent, not the artificial candy cinnamon scent with other candles. He also rated the throw as a “6-7” and mentioned it would be a nice layering candle with an apple or pumpkin scented candle.

BestofCandles.com said the candle was a straight cinnamon scented candle without any sweet notes.  They rated the scent throw as a “6 or 7”

“What a captivating, delicious, warming scent. My entire house smells of spicy cinnamon in a little over an hour. It’s nice not having a floral or fruit tone to this. The color could be a little more inviting, but truthfully once you smell this burning, you’ll forget the color. Unlike other Yankee Candles I have, this is burning cleanly and there is no unmelted wax piling up on the sides of the jar.” – Amazon.com Review

“I love this scent and the small jar definitely delivers. It is strong, pleasant and reminds me of cool weather. It is a spicy cinnamon and smells wonderful! I would recommend this scent at any size, they all have great throw.” – Bed, Bath & Beyond Review 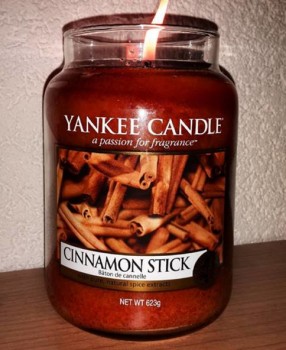 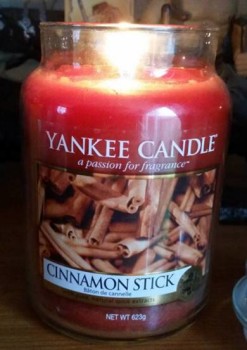