The Spiced Pumpkin candle can be purchased at the following link. 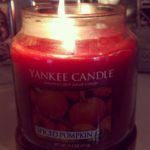 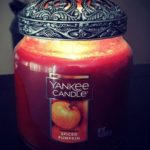 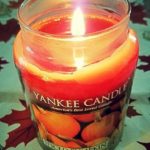 What Others are Saying about the Yankee Spiced Pumpkin Candle

YouTube candle reviewer Marcelino Medina  reviewed a Yankee Spiced Pumpkin large jar candle.  The reviewer mentioned that the clove note was “the star of the show”, followed by a subtle cinnamon note.  He also said he picked up notes of vanilla & nutmeg.  In terms of scent throw, the reviewer called it “great” saying it filled his living space & spilled into other rooms.  He ended the video saying he would repurchase this candle in the future.

YouTube candle reviewer Hearth & Soul posted a video review of the Yankee Spiced Pumpkin large jar candle. The reviewer gave the scent appeal of this candle an “8”, saying he liked the sweet ginger, nutmeg & brown sugar notes.   However, the reviewer said he got no scent throw from this candle, rating it a “3” out of 10. He recommended getting a wax tart if you wanted to purchase this scent.

“Burning candle smells identical to its cold scent. First you smell the spice mix of ginger, cinnamon and clove. Behind that is a more subtle baked pumpkin smell. This is not a pumpkin pie smell; more like a pumpkin custard or pumpkin soufflé, as the pastry scent is missing. The longer this is lit, the more I’m sensing another scent, rather like the hint of wood smoke. I think that is what Yankee Candle calls brown sugar? It’s very pleasant, but not what I consider a ‘sugar’ smell. This has a lovely light scent, which doesn’t bother my allergies, and my small house smells amazing. Per Yankee Candle, Spiced Pumpkin Gold in the same scent as Spiced Pumpkin.” – Amazon.com review

“It smells like pumpkin spice mixed with a little bit of smokiness, like maybe a burning fireplace or campfire. Super cozy. Except I feel that the throw is slightly too weak. If i were to repurchase this candle (which i most likely will, considering it’s only september and i’ve gone through half of it already) I might try the jar version of this to see if i can sense a stronger scent.” – Bed, Bath & Beyond review 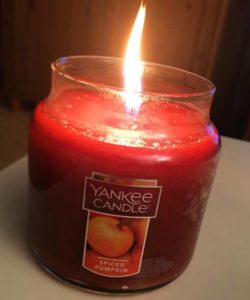